Light breeze and Fog on Day #2 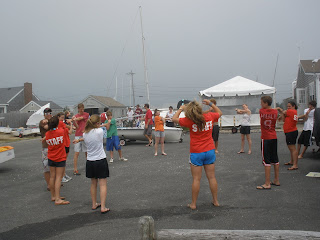 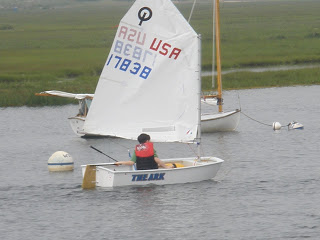 The light morning breeze provided perfect conditions for the beginner and intermediate opti classes. It was just what they needed to get the feel for being back on the water. Brooke had the intermediate class working on tacking and jibing around the motorboat. She said they were "fantastic!"

As the afternoon approached, the 420 and opti advanced classes reviewed rigging as the fog held them on land for the first part of class. As it slowly lifted, DJ said they worked to "dust off the cobwebs."

The 420 race team learned the importance of sail shed and boat maintance as they began their class running to West Dennis beach. They were informed on day #1 that if any sails were left out at the end of the day, they owe the coach a jog. They learned quickly to make sure they work as a team to get things put away! They then worked on rigging their spinakers. The team headed out the mouth of the river for day two of tryouts as the fog lifted. Unfortunately as the fog rolled back in their tryout was cut short. Coach Mildred stayed calm and kept her race team close together as they worked their way back to WDYC.

Just a reminder to all of our sailors that this Friday is FOURTH OF JULY day! Please come dressed in red, white and blue and be prepared to sing patriotic songs for your instructors!

420 A-Team Members:
The first Team Race clinic is this Thursday 7/2 in Chatham. You will be meeting at WDYC at 7:45 a.m and be returning at 6 pm. Don't forget to pack a lunch and bring lots of water! Charlie Enright will be running the clinic.Charlie Enright’s team racing team, The Tannery Loungers, recently sailed as USA2 at the ISAF Team Racing World Championship in Australia. Charlie grew up sailing in Bristol, RI and learned to
team race at Milton Academy. He completed a successful collegiate sailing career at Brown University. 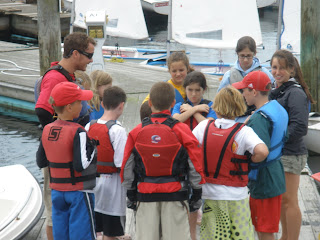 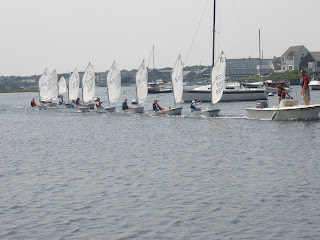 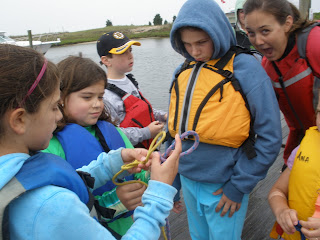 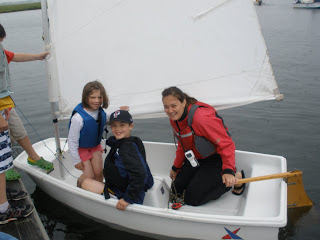 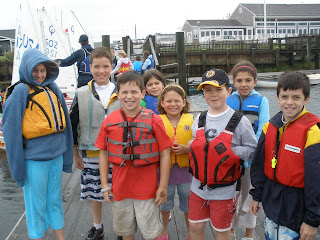 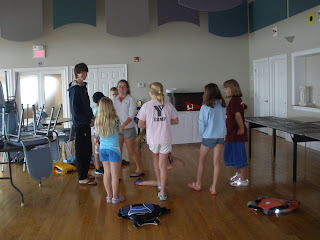 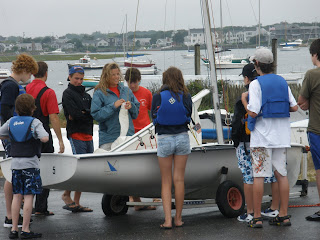 Posted by Program Director at 6:28 PM

Smooth Sailing on the 1st Day! 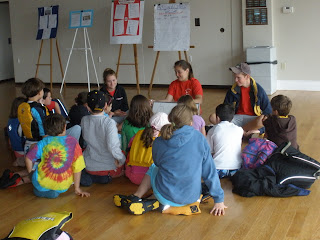 The rain was pouring but that didn't stop the morning classes! The beginner and intermediate 420 and opti classes geared up, put their game faces on and battled the breeze. Ali worked on safety and parts of the boat with the beginner opti's and said that, "the kids from last year really worked to help out the new kids which allowed everyone to get out on the water for a great morning!" Brooke's intermediate opti class learned the value of helping others. They worked as a team to rig their boats and get out for their first sail of the season.

While the opti's were hard at work, DJ and Mildred combined their beginner and intermediate 420 classes to work on rigging and tacking. They wanted everyone to get a good feel for being back on the water. They made it all the way out the mouth of the river to Nantucket Sound! It was quite the accomplishment for the first day.

As the afternoon approached, we saw a foreign object in the sky... THE SUN! As everyone put their shades on, the 420 and opti race teams went out for the first day of tryouts. The opti race team had a rough start off the dock, but made a huge come back on the way in. DJ put a call into the office and thinking there was trouble on the water, I ran out on the dock. I quickly spotted an impressive line of opti race kids one behind the other totally rocking the wind! Awesome job opti race!

Coach Mildred sent the 420 race team out of the river to work on boat handling and racing basics. The sailors all had a great tryout. The highlight of the day included one 420 sailor in particular capsizing right off the dock, trying to show off those roll tacking skills to the coach (looks like we have some work to do!) The team will continue their tryouts tomorrow focusing on spinnaker work.

All in all we had an AWESOME day at WDYC. We will keep our fingers crossed for good weather and a strong wind. Thank you to all of the parents who offered their help today! It is great to know I have so many helping hands. A reminder to parents (and I know it's hard to resist) PLEASE don't rig your kids boats! The instructors will continue to work hard and assure that all sailors are working as a team.

A few of our instructors are WDYC veterans and others are new to the program. They are excited and eager for the program to begin next week. They are all looking forward to a successful, fun and safe summer at WDYC!

Meet the Staff!
Ali Love: Ali is returning to WDYC as an instructor for her fifth straight summer. She is a life-long member of the club and participated in the program for 11 years. She just finished her sophomore year at Cornell University where she is majoring in civil engineering. She is a member of the Cornell sailing team and had a great Spring. She will be teaching Beginner Opti, Advanced Opti and 420 Race B.

Brooke Baker: Our newest senior instructor and coach, Brooke will be leading the Opti race team. She has sailed at WDYC for 10 years and has been an instructor for the past four summers. She just graduated from Wayland High School and will be attending Wesleyan University in the fall. She hopes to major in Chemistry at school. In addition to coaching, Brooke will be instructing the Intermediate Opti class.

D.J. Hatch: D.J. is back for his 5th summer as an instructor at WDYC. He has been sailing for 11 years and is currently on the Bowdoin College sailing team. He just completed his sophomore year and is majoring in classical archeology and minoring in Italian. We are excited to have him back as a WDYC veteran as he grew up in the program. He will be teaching Beginner 420 and Opti Race B

Mildred Conroy: Mildred has been sailing on the Cape for the past 13 years and first started out here at WDYC when she was five. Fourteen years later, she's back and eager to coach the 420 race team. She just completed her freshman year at Washington College where she was a skipper on the sailing team. She just recently returned home from San Diego where she had sailed in College Nationals. It was the first year her team had made it that far. Mildred is excited to be at West Dennis for her first summer as the 420 race coach.

Patrick Hession: Patrick has worked as a junior instructor at WDYC for the last two years and has now stepped up to work as a senior instructor. A recent graduate from Thayer Academy, he will be continuing his education at Boston College in the fall. Patrick will be teaching the Intermediate Opti and Sea Squirts class.

Posted by Program Director at 1:26 PM

Happy Summer 2009!
I am very excited to be working as the new sailing school program director at WDYC for this upcoming summer. I will be a senior at Stonehill College in the Fall where I am majoring in Early Childhood Education. I have always spent my summers on Cape Cod and couldn't image being anywhere else during the best time of the year. I grew up right around the corner at Hyannis Yacht Club where I started sailing beetle cats at a very young age. I quickly fell in love with sailing and racing as I moved through the opti and 420 race program at HYC. I first began working as a junior instructor at Hyannis and then went over to Great Island Yacht Club for two summers where I worked as a senior instructor teaching opti's and 420's. Eager to get back to coaching, I went back to Hyannis from 2007-2008 where I traveled with my opti race team to regattas all over the Cape and islands. This summer I was interested in taking on a new challenge and lucky enough WDYC needed a new program director. I have heard wonderful things about the program and the fabulous sailors that result from their great instructors.

I am determined to make this a safe summer filled with sailing improvement and summer memories that will last a lifetime. I am looking forward to meeting you all throughout the next few weeks. Please don't hesitate to come introduce yourself to me! I'm looking forward to making this a successful WDYC year in sailing.

This blog will be updated daily with instructor and student reports from class, upcoming events, regatta logistics and sailing pictures. This will be a great way to check in on what is going on in sailing and find out how you can volunteeer with upcoming events. In addition to accessing this blog online, there will be a binder outside of the sailing office with the blog printed out.